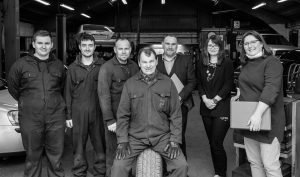 Clive Woolford Motor Engineers began by a chance meeting between Clive Woolford and Mr Harry Workman whilst on holiday over forty years ago.  Clive and his wife Hilary worked for Rolls Royce in Derby and were keen to begin their own business in vehicle repairs.  Clive was invited by Mr Workman to come to Tewkesbury to repair and maintain his dairy vehicles at Cotteswold Dairy and both remained loyal to each other thereafter.  Ian Boskett joined Clive and Hilary almost at the beginning as Clive’s first apprentice and their reputation grew steadily along with the business.

Clive and Hilary retired and sold the business to Ian and his wife Suzanne who work hard to maintain it’s good reputation. In 2010 everyone at the garage were thrilled to hear that it had been placed the top fifty garages in the UK and in the top five in the South West region as voted for by their customers in the Motor Industry Code of Practice golden garages poll.  They were equally thrilled to be named the 2nd most loved MOT test Centre (just four votes off from being number one!) in the whole of the UK in the thebestof.

Then in 2011 Clive Woolford Motor Engineers Ltd was voted to be the best garage in the UK through the Motor Codes Golden Garage competion – an accolade they are very proud of indeed.

In 2018 the garage joined the Groupauto network of garages.

Check if you've got a valid MOT, it takes no time at all...

Book your service online with Clive Woolford Motor Engineers Ltd, it's just a click away...

Websites for the motor industry from